Windows update eats your bandwidth and precious time whenever you update your windows online. When you don’t have enough bandwidth and time to update your windows. In these cases, your time saver is windows offline update. Sometimes what happens you want to update your OS, for this, you required an internet connection. You have the internet connection but it’s running at the top speed of snail ;-). At this time you need to read this post. It will solve all your problems.

After considering this post you will be able to install Windows 10 update offline without any error.

You are using Windows 10 and when Microsoft releases an update; it becomes a desire of the user to update Windows. To meet this desire, I am going to show you How to update Windows 10 without internet. Before some months Microsoft has released an update of official Windows 10 to fix some security and other updates for fixing some issues and bugs on the official previous version of Windows 10. Microsoft will be kept releasing updates of windows 10. So windows 10 offline update option makes the procedure of updating windows a piece of cake.

This method consists only several steps which are the easiest. All steps of this method with notations are as follows:

All latest windows10 update is given above with update type, release date, size and download link.

The best part of this software is that it never leaves a trace in windows registry.

When you will launch this software, you will not get a better GUI. You will get a multi-tabbed GUI (Graphical User Interface). Tab will allow us to perform various actions like search, selecting downloads and checking the update history. 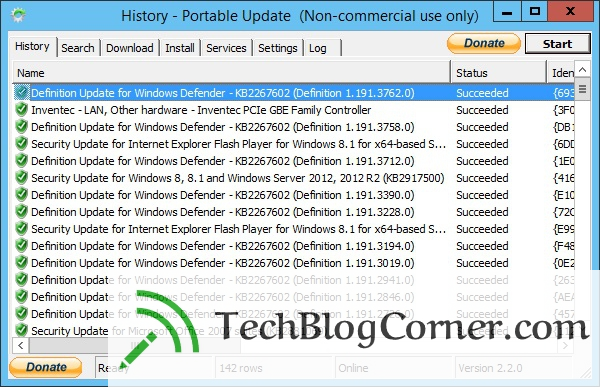 So the method is simply downloading the windows 10 update you need to install. Remember that the downloaded files will be saved in Cache folder. This will help you when you will install the update without an internet connection.

Now you will be able to update Windows 10 offline.

It tested on every Microsoft OS. (Check it on its official website.)

Using these methods you can easily update windows 10 offline without internet.