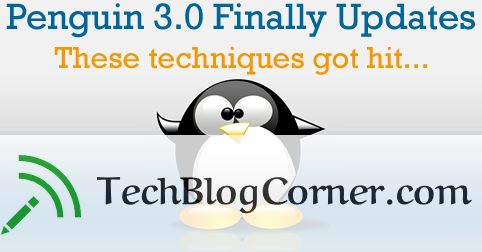 Late Friday night, Google began rolling out Penguin 3.0.Google’s John Mueller said in a video hangout minutes ago that the roll out is now complete and fully done.

Lot of discussion happened in SEO communities like WebmasterWorld
Here are some key takeaways from all over the world about this update . Here we go :

1) International hit first
Penguin rolled out on international Google sites including Google.co.uk, Google.de and Google.fr first, instead of rolling out within the US first.

Gabe shared this screenshot from SEMRush for a client that had worked hard on cleaning up a bad link profile, which shows a huge spike on Saturday and a continued upward trend on Sunday, which also highlights the fluctuations of the rollout.

Some people have noticed that sites utilizing 301 redirects to get around previous penalties seem to have been impacted.  This is definitely seen as a grey to black area for SEO, but it can have results.

While affiliate sites tend to be the ones most often designed as “churn and burn”, it seems that this update may have specifically tried targeting affiliate sites with the number of sites that are reporting being impacted by the latest Penguin.

Tools such as GSA and additional private blog link networks (PBNs) seem to have been impacted, although we did see many of them previously penalized earlier this year. However, some webmasters say that careful usage of these tools resulted in no Penguin impact this time around.  Especially with PBNs, a lot has to do with how they are implemented and exactly how private they are.

Penalty notices do not seem to have gone out in Google Webmaster Tools accounts as of yet, alerting webmasters to the penalty.

Do keep in mind that the snapshot used for disavows was from the middle of September, so if you have disavowed any links within the last month, it likely would have had no impact on this Penguin update.

How to recover from Penguin 3.0 Update :

When you get penalized by Penguin, you need to clean up the problems before the next update goes out.  There was talk of Penguin moving towards a rapid refresh cycle where we would see it update much more frequently – similar to Panda – so that webmasters aren’t stuck waiting more than a year to come back from Penguin purgatory.  However, this still remains to be seen whether this will happen or not.